This site uses cookies to help us provide quality services. Using our services, you consent to the use of cookies.
More info Agree

On a very hot night I made my way 5minutes down the road to TONBRIDGE CASTLE which was the setting for the COUNTRY SUPER STARS DOLLY PARTON SHOW. I found a seat on the walk way which looked straight onto the stage, and the grounds were filling up with people and their Chairs. At start time ANDY BRETT who put the whole MUSIC WEEKEND on came on stage to bring on the first act of the night and that was the HALEYS and from them we all heard “Life That’s Good” along with “Help Me Made It Through The Night” then it was a self penned number “Luckiest Girl” and moved onto the Big O number “You Got It” then we all went to find some “Wildflowers”. The HALEYS kept things on the right track with “Love Of My Life” and “Long Time Gone” along with “Make You Feel My Love”. Tonight and any time I see the HALEYS the number that stands out for me is “Cowboys Sweetheart” and to say they were the support act tonight, one side of the stage BECKY and JO-ANN as always Harmony wise Brilliant and then BRIAN this guy can make his Guitar talk, so from the HALEYS a Brilliant opening to the Show. 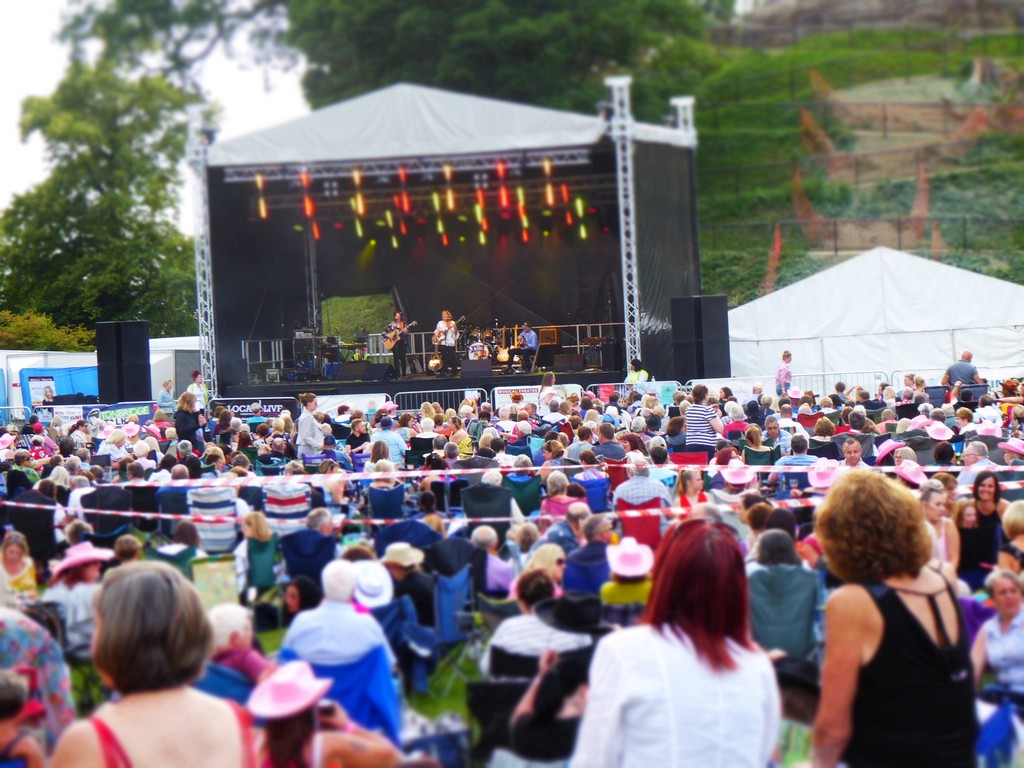 ANDY was back on stage to introduce the start of the DOLLY PARTON SHOW, and along came JOHNNY CASH who gave all some “Falsom Prison Blues” and a couple more numbers before bring on stage SHINIA TWAIN with “Just Like A Woman” as well as “That Don’t Impress Me Much” then she wanted to know “Who’s Bed Have Your Boots Been Under” and moved onto “Don’t Be Stupid” and closed with “Your Still The One”, and brought on stage GARTH BROOKS and from him all heard “Outside The Fire” then we met up with some “Friends In Low Places” then we all looked up to the sky as “The Thunder Rolls” which brought to a close the first part of the Show.

After a short break it was time for DOLLY PARTON to take to the stage and from her we heard all the numbers you would expect to hear like “Looking Like That” onto “Jolene” with all in the castle grounds joining in, then we all heard the story of the “Coat Of Many Colours” before meeting up with “Applejack”. DOLLY had all joining in as she went into “I Will Love You All My Life” and closed with “Here You Come Again”, and DOLLY then brought on stage, KENNY ROGERS and from him “Ruby Don’t Take Your Love To Town” then KENNY brought back DOLLY and they went straight into “Islands In The Streams” and they closed the Show with “Nine To Five”. It was clear that they would have to do one more and back they came with “Jolene” for the second time tonight, but what the hell it did not worry anyone in the castle as again they all joined in to close the Show in style.

All the Artists were backed by the TENNESSE ALL STAR BAND who on the night were SHAUN MURRY on Guitar, DAVE HAYWARD on Pedal Steel, JAMES WILSON on Lead Guitar, PETER WHITE on Keyboard and WOL WEBSTER on Drums five very talented Guys. This is the first time I have seen the Show, heard a lot about it and I must say ANDY and SARAH JAYNE CRUST between them put on a Superb Show their impersonations are spot on, I must admit I closed my eyes went DOLLY was on stage and thought the real one was there, a Show well worth seeing if it is near you. 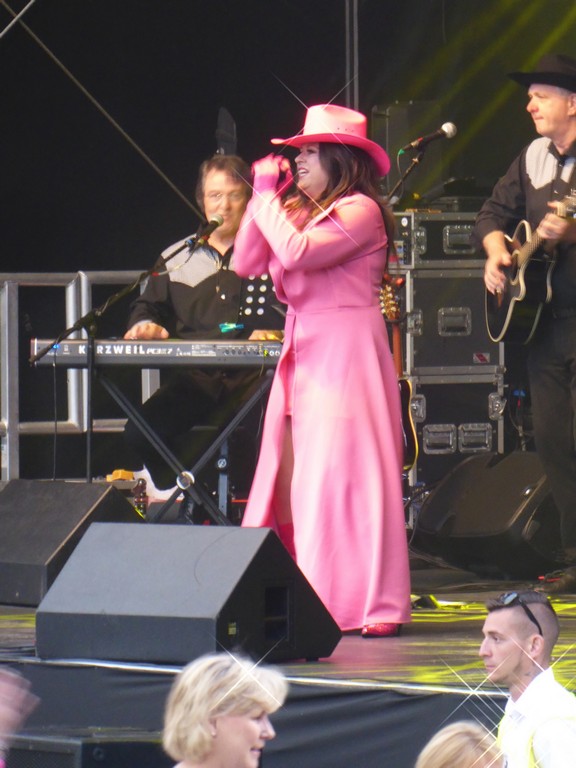 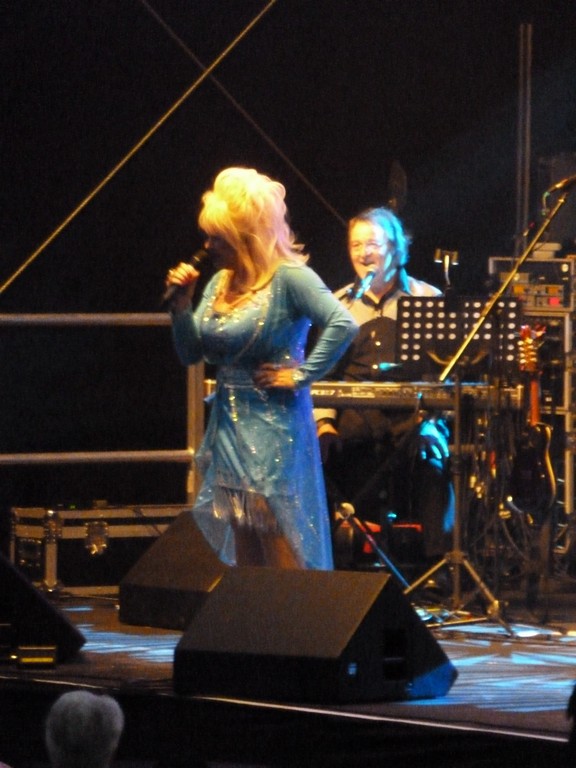 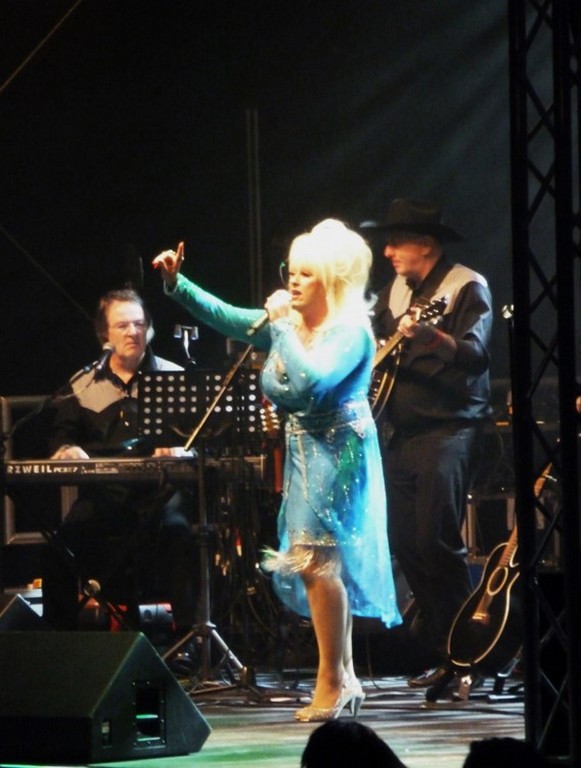 Before I close I must say Thanks to ANDY BRETT for the invite and to all your helpers and to those who checked out all the bags on the gate, all very friendly. To all who turned up around 1,900 so DOLLY said where did you all come from, great to see, there are a lot of Clubs in the area you could also go to.